After the first half of 2017 saw unbelievable chart dominance by male artists, their female counterparts have begun to resurface with a flourish of fervour. Five years since her last effort, P!nk (born Alicia Moore) has returned to the spotlight with Beautiful Trauma. Beautiful Trauma is a fitting title for the latest LP, because ultimately, the album’s tracks can be separated into two categories – Beautiful and Traumatic.

The album’s lead single “What About Us” was an inoffensive combination of inspiring sayings plucked from Hallmark cards and poor, generic production. However, who knew that would be the case for many of the album’s tracks. In many instances, it seems like Moore is merely ticking boxes with the inclusion of cuts such as the title track, a bad attempt at a pop love song that leaves a bad taste in your mouth for the songs that come after it.

The album’s biggest offender comes in the form of “But We Lost it”, a piano ballad that doesn’t offer any growth in terms of experimentation with the genre. The lyrics of this track are horrific, not fitting to its instrumental support and sounding forced together rather than a seamless blend of lyricism to music. Moore’s vocals struggle on this track sounding uncomfortable in the song’s verses. “Better Life” is a sore mix of gospel and pop that doesn’t really work, but Moore’s delivery is substantially better than prior tracks.

Moore’s conviction and vocal are really the album’s saving grace, particularly in the album’s second half, making tracks like “Wild Hearts Can’t Be Broken” and “You Get My Love”. P!nk’s vocals are marvellous, notably on “Whatever You Want” and “For Now”, the album’s strongest love songs. “For Now” and other album highlight “Barbies”, a breath-taking discussion about growing up, benefit massively from the touch of upcoming singer-songwriter Julia Michaels.

“Where We Go” and “Secrets” fly in the face of the abysmal effort to replicate current pop music that was “What About Us”, brilliantly capturing the epic and experimental nature of the current pop landscape. The album’s true highpoint comes in the form of “I Am Here”, a wonderful pop-folk blend that soars on the strength of its production and Moore’s vocal performance. 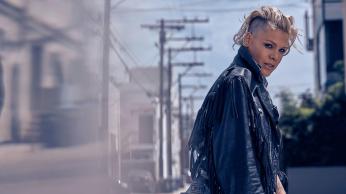 Beautiful Trauma is an assorted bag, split into songs that truly capture the brilliance of the artist who sings them and songs that are an insult to the fabulous and experimental work that Moore’s contemporaries have produced this year, from Lorde’s Melodrama to Kesha’s Rainbow. It is a step backwards from her prior work and for that reason it’s a disappointment. A disappointment that is only highlighted by just how great its better moments are.