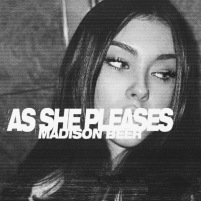 The music industry has become very crowded in recent times and as a result, it takes a very distinct personality to elevate an artist. With the release of her debut EP As She Pleases, Madison Beer takes a shot at being the next big thing, and, to a large part, she succeeds. The 18-year-old YouTube sensation turned recording artist was discovered and signed by pop superstar Justin Bieber after he posted a Youtube cover of hers to his twitter. The young star spent the last few years finding her footing releasing singles here and there. As She Pleases proves that was a smart move on Beer’s part.

As She Pleases is a fabulous debut that is teeming with promise and attitude. The opening track, ‘Dead’, is a slick, minimalistic R&B-tinged, tropical toe tapper. ‘Dead’ cleverly plays on the age old phrase “I can’t live without you”, savagely asking “You say you can’t live without me, then why aren’t you dead yet”. ‘HeartLess’ is throbbing, skittering pop-R&B number that harkens to modern hip-hop hits such as Post Malone’s ‘Rockstar’ while referencing vocal styles like Ariana Grande and JoJo.

Elsewhere, Beer incorporates a variety of other styles. ‘Tyler Durden’ is a tender, soft acoustic ballad about unrequited love that is beautiful but relatively uninspired. The floaty ‘Teenager in Love’ adopts a doo-wop/pop sound that songs like Meghan Trainor’s ‘All About The Bass’ and Stooshe’s ‘Black Heart’ brought back into the mainstream. Beer channels the success of Dua Lipa on both ‘Home With You’, a straight up tropical-pop song that is elevated by its unbothered delivery, and ‘Say It To My Face’, a sassy, acoustic pop cut.

The EP is amalgamation of every popular branch of pop music that really shouldn’t work, but it really does. The execution of every track makes it seem fresh despite being done before. Every track hinges on Beer, with her vocal performance and overall confident and genuine delivery heightening the material given to her.

‘Fools’ is the EP’s highlight. The track is an unashamed pop song packed with strong lyricisms and interesting production choices. This is where Beer sounds the most comfortable, sliding up and down her register. The experimental use of vocal alteration on the bridge makes the track even more of a standout.

Overall, Beer uses everything in her arsenal to make her debut EP as strong of a showcase as she possibly can, and she succeeds to a large degree. As She Pleases is a sonic mess that sounds like a perfectly cohesive unit because of the voice of its star, relying heavily on her talent to make it work. And god does it work.