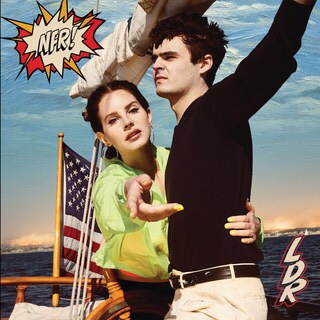 Lana Del Rey has always been obsessed with America. From the unrelenting idealism of the all-American dream, which she filtered through a sublime vintage lens for her Born To Die era to 2017’s Lust for Life and it’s damaged questions of what truly makes up this great Americana she once prayed to with ever ounce of her being. Lana Del Rey has also always been somewhat of an enigma. With each LP, her love of aesthetic and pop culture has built a wall between her and her music. As a fan, I adore the persona, the Americanness, the daddy issues and the melancholy trap beats with which they come with. However, as her President continues to try and build his wall, with Norman Fucking Rockwell, Del Rey is taking a wrecking ball to hers.

It is not that Del Rey abandons what has made her, instead stripping it back to its roots, and to her roots. The album has a noticeably overt personal element to it. Del Rey has always sung of youthful lovers and rich men with drug abuse issues, to the point that even when she’s sung in the first person it rarely registers as anything beyond another character in a marvellous fictional world of her own creation. On Norman Fucking Rockwell, Del Rey is a person, rather than a persona. She sings of her own lover, her own desires, her own feelings with a passion and a frankness that we haven’t seen before. From the opening note and the albums title track, Del Rey voice is clear and perfect as she sings “you fucked me so good/ that I almost said I love you”. The cheekiness which would have laced a lyric like that on Born To Die, is replaced here by a fabulous sincerity, that transforms it from a one liner to an emotional knockout. Much of the album is the same, each word dripping in genuineness.

Jack Antonoff handles the album’s production, and is a major asset in developing that atmosphere of sincerity. Each track is humble, with simple arrangements, yet complex nuances forming much of the tracklist’s instrumentals. From the soaring violins of ‘Norman Fucking Rockwell!’, to the eery almost 5 minute long outro of ‘Venice Bitch’, to the signature Del Rey trap undertones of ‘Cinnamon Girl’, Antonoff does not stifle the creative genius that has built Lana Del Rey, instead stripping her back, placing a spotlight on her, and telling her to shine.

Antonoff is also major contributor on the songwriting side of things here, but as with his work with Lorde and Taylor Swift (most recently on last week’s release Lover), it is clear that he is merely aiding one of our generations greatest songwriters perfect their craft. Del Rey who has spent years encapsulating her emotions in pop culture references and grainy vintage music videos, truly out does herself on Norman Fucking Rockwell! packing emotion weight behind every lyrical punch she lands. From the stunning acoustics of ‘The Greatest’ to the heart swelling simplicity of ‘Love Song’, Del Rey is on fire as she captures love with an awe inspiring realism. Her usual sadness and flare for soap opera-esque dramatisations are stripped away leaving behind a keen eye for detail and anecdotes. It is never overly dramatic, it’s never understated, instead, it merely is.

Throughout the almost 70 minutes of Norman Fucking Rockwell!, it is truly difficult to pinpoint what exactly it is that makes it so wonderful. Sure, there is the wonderful production, and the marvellous lyricism, and while they may be different to Del Rey’s previous releases, her prior LPs have all had those things. However, as the final notes of the album’s closing track ‘hope is a dangerous thing for a woman like me to have – but I have it’ dissipate, it’s becomes clear what sets this record apart. It isn’t a love letter to the great American dream, or to the death of our world. It isn’t even a love letter to a lover. In its final moments, the album’s poignant realism is replaced with just enough optimism that you can almost hear her whisper ‘keep going’ to herself, and it becomes clear that Norman Fucking Rockwell! is a love letter from Del Rey to herself. A gorgeous one at that.